A few days ago a post appeared on the Frankford Radio Club reflector, saying that a Danish radio amateur, Thomas, OZ1AA, was cycling through our club’s region and was looking for places to stay. Thomas was not just doing a local tour, he’s cycling around the world and is into his fifth year of two-wheeled travelling. He has a fascinating blog which details his travels at http://www.cyclingtheglobe.com/

We thoroughly enjoyed having Thomas visit, and were joined for the evening by John, W2GD, who has been following Thomas’ progress for a while. Over dinner we swapped stories of DX, cycling, and contesting. Word of Thomas’ travels has spread through the ham community all the way up the east coast as he heads for Canada, and almost everywhere he’s been welcomed by radio amateurs who have offered him a place to stay and been rewarded by tales from countries we often reach out to by radio, but rarely visit in person.

This weekend was the ARRL DX CW contest. My goal this year was to make more than 3000 QSOs. Last year’s effort fell slightly short with 2972 Qs claimed (2954 after checking), 432 claimed mults (418 after checking) and a final claimed score of 3,771,468 (3,689,268 post-checking). My final QSO total beat the target, although with relatively poor conditions on the low bands the number of multipliers was slightly down on last year.

QSOs by hour – all bands.

Looking at the rates, it’s clear where I went multiplier hunting for long stretches of the early evening and into the night. It’s easy after the event to see that perhaps more running on 40 or even 80 on Saturday night would have been a good idea. The last hour before a sleep break on Saturday gave a decent run rate on 40, perhaps should have done this earlier in the night as well.

I’m always amazed by folks who can write post-contest reports with great detail for the entire contest about what bands they worked, how the bands sounded, etc. At the end of day 2, I can hardly remember what day 1 was like! A few things did stick in my mind, though. My strategy last year was to spend plenty of time on 160 and 80, with 88 Q / 49 mult on 160 and 370 Q / 72 mult on 80 m. This year’s totals were 45 / 29 and 269 / 58 – way down on 2013. The low bands were very noisy early on Friday night into Saturday morning and I’d thought the totals would be really lousy. However, around 2 am local I checked 160 again. The noise had dropped off, and looking at the P3 bandscope there were lots of little spikes all across the band as signals from EU started popping up and so the multiplier totals started creeping up also. Another nice memory is of the good openings into Asia. I’m topographically-challenged towards Japan, so it’s unusual for me to be able to run JAs but this was possible both days. Still, the rates to JA were not great and so in the end I’d usually turn the beam back to EU. At the end of two days there were still plenty of new callers from EU, a seemingly-endless pool of stations, with my top-ten entities this year being Germany, European Russia, Ukraine, Italy, Czech Republic, Poland, England, Netherlands, Hungary and Slovenia.

This is very similar to 2013, with a couple of switches in places. Slovenia pushed the Swedes out of tenth place this year – amazing, considering the huge ice storm in Slovenia only a couple of weeks ago. I expected to hear very few S50 stations because they’d all have lost antennas, but no, they were out in force. If there was a prize for number of Qs/population amongst my top-ten countries, Slovenia would win by a long margin!

My thanks once more to the support team (XYL) who is very good at providing meals and caffeinated beverages to me at the radio.

So what to do next year? A better 40 m tx antenna would be good. Perhaps a delta loop or half-square oriented towards EU? Or a four square? SO2R? More caffeine and less sleep?

Being located on the east coast, my strategy for WPX is fairly simple; work lots of EU, then work some more EU, and make sure you work ’em on the low bands to make the best of the higher points value.

Didn’t work out this year. Just before the contest the bands tanked. Last year I’d done well by starting on 20 m for an hour, then moving to 40. Tried the same again in 2013, but the first hour was very disappointing. With a slow start, everything seemed uphill after that.

40 was ok-ish for a while. 80 m did nicely too; the delta loop I have up is a good antenna for that band, and in another contest where per-band multipliers are important, I’d spend more time there. In WPX it’s not important to work mults on each band and so and when the rate started dropping off on 80 it was back to 40. With nothing much happening, sleep seemed a good option, hoping that by the following morning the bands might be coming back. Not so. Running up and down the bands to try and find openings kept a trickle of contacts coming, but not enough. Conditions finally picked up in the last couple of hours on Sunday, but too little, too late to pull out a really decent score.

Congrats to Paul, N4PN, who looks to have topped out the Tribander/Wires category in the US this year. Hope to give you a closer run for your money in 2014!

I started dabbling in contests several years back, but it was only when the Steppir went up a couple of years ago that it actually became feasible to be competitive, at least in certain contests. Thinking that you might place well in a given category is certainly an incentive to entering a contest – trying to better your own score each year is interesting, but trying to better everyone else’s is something else! For me, a large part of the fun of ham radio contests is in the planning – figuring out exactly how you can be competitive in a particular contest, and what you can do to place well or win.

CQ-WW-WPX CW is my favorite contest for a number of reasons:

So why is K3EL competitive in this contest? Well, the east-coast location helps, as mentioned above. After that, it’s mostly about antennas! My 3-ele Steppir at 40 feet  (with some terrain advantage towards EU) probably beats out most trapped 3-ele tribanders at an equivalent height, at least for gain. F/B is lousy on 10 m, but that’s ok in WPX, US contacts count, so putting out a decent signal off the back of the antenna isn’t a disaster. Furthermore, the fast 180 degree switching on the Steppir allows more agile coverage of all bands compared to a traditional beam. 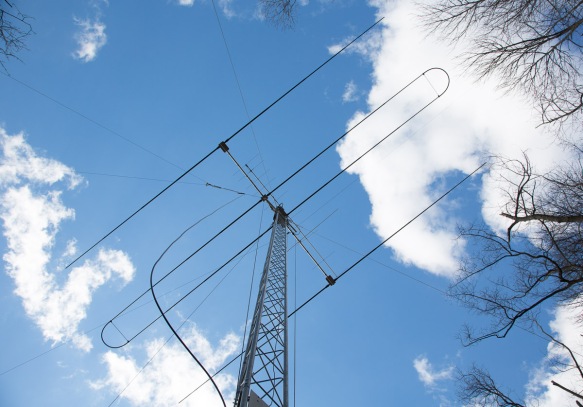 There are woods at the back of the garden and tall trees around the property, so this is good for setting up effective antennas for the low bands. On top band, I use an inverted-L, with the vertical section about 50 feet high, supported by the top branches of a Sassefras tree. It’s about 170 feet long in total, with a variable capacitor at the base to tune it.  However, WPX doesn’t do multipliers by band, so for this contest, 160 m isn’t really important. Will I spend any time on 160 in WPX 2013? Maybe not at all! On the other hand, 80 m can be a good rate band. Last year for WPX I was using an 80 m dipole at about 45 feet up. Since then, the dipole has been relocated, and a 80 m delta loop is available. The loop has performed very well, and it will be used instead of the dipole in WPX 2013. 40 m is my weak point, antenna-wise. The Steppir has a folded dipole element for 40 m, but the performance is just “ok”. One day I might add another delta loop for 40 m, but it won’t be in time for WPX this year.

Apart from antennae, what helps make a competitive score? I find careful pre-planning is useful and did a lot of this for WPX 2012. Before the contest, I knew when I should be on what bands (based on propagation prediction software as well as recent experience on the bands – although the plans were modified based on actual conditions). Overall, conditions shouldn’t be so different this year from last (barring any new burst of sunspots or a solar flare) so I’ll be dusting off last year’s plans and tweaking them. If the support team (XYL) is around, meal times are planned – should be the case this year. If not, as in 2012, food was pre-preared for breaks (in WPX you’re allowed to operate only 36 h out of 48 as single op, so you have the luxury of eating and sleeping…!). Last year I added an Acom 2000 amplifier – the auto-tune amp makes it very quick and simple to jump from band to band. No major changes to the station equipment for this year.

During the contest, the main thing I try and do is to keep actively mining the bands; if CQing isn’t doing much, what’s available via the 2nd VFO? If the band is overall not too productive, what other bands should be open? What continents might be opening up (if you’ve WPX’d out EU, where is the next multiplier coming from?). With many WPX multipliers coming from the USA, 15 m is a great band for contacts in the afternoon when conditions to EU may be dropping off.

Pages on this site